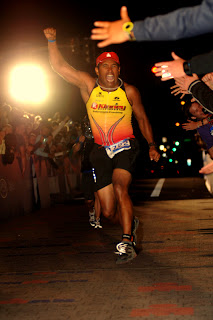 Race day morning at home:
When the alarm woke me up at 3:30AM, it felt like I hadn't slept at all the night before.. or for that matter the entire 12-months leading to the event. I gathered myself, showtime was ON and there was no looking back now. Two-years of focused effort was going to bear fruits today.. We had to leave the house at 4:45am and I had a lot to get through. I had a clearly documented race day plan that I had discussed at length with my coach Paul Kinney, so the chores were almost mechanical but time consuming.The race day bags were all ready so all I had to do was to take a bath, make my morning fresh juices, consume them and then relieve myself. I've been on a liquid vegetables/fruits juices breakfast diet for the past 2-months now and that worked really well on race day as well.

The nerve wrecking transition before the swim start:
The conditions were cloudy and overcast. The waters in the lake Coeur D' Alene looked calm but that's where we, the contestants had it wrong.. I went through transition, checked my bike, breaks, tires, air pressure, filled race bottles with my main electrolyte drink i.e. coconut water, special needs bags, etc. By now it was 6:30AM and we were asked to get ready for the swim. The water temperature was a whooping 53 degrees Fahrenheit (~10 degrees Celsius). I used a cold water from a faucet nearby  to fill a part of my wet suit (this helps warmup and acclimatize the body to the colder waters). The start is a beach run format and no one is allowed to warm up in the lake which IMO (as we learned later) should be discouraged by Ironman management. Because of the mass start, it feels like one is swimming in a washing machine with very cold water.. the experience is more traumatic if one start ahead with the strong swimmers. So I decided to avoid that and start in the middle to the end of the pack. None the less, I still got slapped twice and one time I nearly lost my goggles to a nasty kick on my face. Here's a video of the start line up that gives most people goose bumps.

I started well (no ice cream headaches, heart palpitations etc) and I thought to myself.. I have the swim portion under control. That changed within 600 yards of entering the water. The race was a two loop course and based on previous practice swims, I hoped to finish under 1-hour and 30 minutes. The waters got very choppy, the currents picked up and my speed dropped. I saw several swimmers getting picked up. In all 85 swimmers out of 2300 left the race mid ways. Three water ambulances surrounded most of the sections I swam in looking for signed of distress from weaker swimmers. I tried not to make eye contact with them though I was very scared navigating the 2-3 feet tall waves .. I could not afford to be one of the failed swimmers.. I had a chip on my shoulder and a failed race from last year that I had to get over.. So I persisted... swimming overcoming the course one buoy at a time.. Coach Liz had once advised me on swimming with the head 6-inches under the currents in choppy waters like the ones I faced and I did exactly that.. In the end, 900 yards before the end I got a bad cramp in my right hip.. I was running out of time.. aiming now for a 2-hour finish facing the swim cutoff at 2 hours at 20 minutes. So I swam with the cramp in place.. almost not using my legs at all solely relying on my hands to get me to the shore.. In transition while changing I heard a man had suffered a heart attack in the water. The guy died a couple of days later which was very sad. 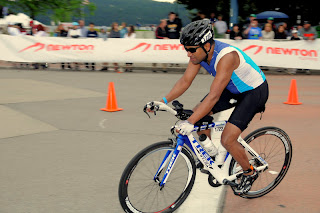 This year, CdA Ironman had a new bike route. It wasn't as technical or curvy as the one before but it had three climbs each lasting about 2-3 miles each with a steady 2-3% gradient. That kind incline is OK to handle for short spurts but that wasn't that case here. I drove the course the day before and it felt doable. What I did not factor was the headwinds that were set to come on race day :-). As I got on highway 95, fifteen miles into the bike ride, the winds picked up steam. Before I knew it, my bike speed was averaging the single digits on the uphills. The best I could do then was not to push too hard on the pedals, stay in the aero position, conserve energy and save my legs for the run. Coach Paul has an analogy of the race day human body being like a checking account..  you only take out as much as is barely needed. You risk going broke if you spend too much too early. I used Coach Kevin Coady's advice to coast the down hills and conserved energy even while doing high speeds. I finished the first 56-miles at 1pm well before the 1:30pm cutoff mark. But the smell of things that could potentially go wrong from last year's experience kept lingering.. The potential flat tire was the biggest concern. It would take me under 15-mins to fix a flat tire and so I was always planning time to handle two flat tires. Planning for that eventuality, I was just on the edge with the time. I cruised along to my next milestone which was the 92-mile checkpoint cutoff at 4pm. At mile 80, I crossed the physiological barrier of last year's event. It was at mile 80 last year that I completely fell apart and could go no further. This year I was feeling quite strong at mile 80.. Now I could see the end in sight .. I finished the 112 mile bike ride at 5:10pm, twenty minutes shy of the 5:30pm cutoff. 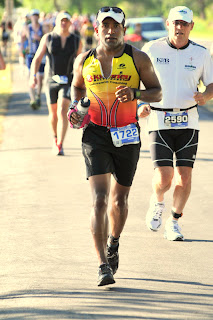 I had little left in my legs when I started the run, averaging a 12-min mile in the first three miles. It was clear that the run wasn't going to get any easier for the remaining 23 miles.I had taken down 2000 calories of cliff blocks on the bike and now the sugar repulsion was getting to me.. I  found solace in chicken broth that was being served at the water stations that were a mile apart. I liked the broth so much that I quickly gulped down a couple of large glasses of the same.. before I knew it, the revolt within my body had started and I was throwing up every few minutes.. At mile 10. I caught up with coach Paul Kinney and discussed my situation with him.. If I could eat no more as was the case, I was sure to collapse before the end of the race. Paul's advice was that I stay with salt pills, that have vital electrolytes and keep drinking lots of water. A good samaritan on the run handed me a couple of caffeinated  salt pills that really helped..
I cross mile 13 around 8:30, thirty minutes before the half way point time limit. It was clear that I had to up my speed if I was to complete the race so I started jogging at a faster 13-min mile pace. The running felt alright til mile 15 when I decided to experiment with some food.. a piece of banana and oranges with that felt good and I was able to hold them back.. The new calories helped me keep going but by then, I had lost so much speed that my only option was to walk off the rest of the course. My goal was now to walk as fast as I could and to cross the the mile 21 cut off before the 10:30 pm deadline. It had gone pitch dark around 10pm and going next to the lake, I had to be careful of not getting into an accident. 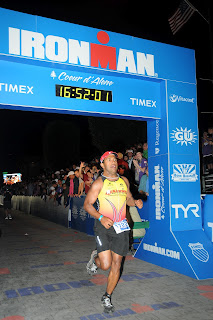 I crossed mile 21 at 10:18pm well aware that my speeds were slowing down with each mile. The good thing was that I wasn't cramping in the legs. I was just very tired. At mile 23, I still had 50 mins left and 3.2 miles to cover. That distance looked hard to finish in my shoes. I tried running but could not hold a run for more than 1-2 mins at a stretch. So I gave up on the run and stayed at a fast 15-16 min mile walk..
So with that I completed the run at 11:52 PM, eight minutes short of the final cutoff. I was elated to hear my my name being called out at the finish line by the main voice of the Ironman, Mr. Mike Reiley.. Hearing the words "HARPAL KOCHAR... YOU ARE AN IRONMAN" made me jump in the air like I had no aches or pains at all..

The crowd support was simply amazing throughout. I've attached a video below that tells you of the electricity in the air at the end of the race.

Nutrition SHOULD BE MORE THAN300 / HOUR I THINK ON THE RUN.   ALSO, I'D SET A TARGET RE: HOW OFTENYOU'LL FINISH & REFILL YOUR HANDHELD.  EVERY 4TH OR 5TH AID STATION? IT'S SUPER EASY TO NEGLECT EATING / DRINKING ON THE RUN- DON'T! UNLIKE AN OPEN MARATHON YOU'RE ONLYSTARTING WITH A "HALF TANK" OF FUEL, SO YOU NEED TO EAT / DRINKMORE.

FINISH:
Posted by Harpal at 2:00 PM No comments: